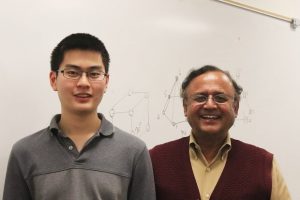 George Wang, 18 years old and freshly graduated from Oklahoma School of Science and Mathematics this past May (2018), recently made an unprecedented discovery about carbon atoms.

George’s findings came after his chemistry professor challenged the class.  Carbon’s standard four bonds have been taught in chemistry class for years; however, new research was published in 2016 asserting that carbon can actually make six chemical bonds.  OSSM chemistry professor, Dr. A.K. Fazlur Rahman, asked his students if carbon could bond with more than six atoms.

George Wang took that challenge.  After first verifying the work of the European researcher who published the 2016 paper, he then worked on calculations which proved mathematically that carbon could indeed make a seventh bond previously thought impossible.  Wang and Rahman worked with University of Oklahoma chemist Dr. Bin Wang to verify George’s work, and George’s research was recently published in a peer-reviewed international chemistry journal.

Dr. Rahman said, “George Wang’s discovery is remarkable not only because it was made by a high school senior, but that it was made by a student in a state that consistently ranks among the lowest in education.”

George Wang is headed to Stanford University in the fall.  He is interested in studying chemistry, math, physics, and computer science.  Who knows what he will discover next! END_OF_DOCUMENT_TOKEN_TO_BE_REPLACED

OSSM is a mix of the most challenging experience I have ever had, and the most rewarding at the same time. I have learned so much so far, and I have gained friends I would have never gained anywhere else!

My first year at OSSM improved my time management skills greatly.  It also improved my work ethic and has advanced my academic career much more than a regular high school would.

OSSM helped me the find the people that care about me and push me to be better every day.